After almost 4 months, I finally have the time to sit down and write about MAL2011. I will try not to do that again! waiting this long means you forget things! For MAL, I shared a room with Dakota, American leather woman 2009-10, her girl Kim and the producer of the Mr San Diego Leather contest, Adam. I was the first to arrive in DC, which, was a good thing since the room was in my name. Dakota and Kim were supposed to arrive earlier, but had car trouble. I was able to get checked in and settled before anyone else arrived. Dakota and Kim arrived and after a quick set of hugs, we unloaded their stuff and put it in the room. Then we headed down to registration. Kim picked up her package, and Dakota and I spoke with another member of our sash family, American Leather Man 1997, Jim Raymond. Jim had arranged for me to be theJudges Boy at the contest, and had also arranged for Dakota's entry as well. We were registered in no time at all, but during that time (really seriously, it was about 10 minutes total), we must have seen and talked to about 50 people we knew. I had done enough traveling that this was feeling like a family reunion. In a way, it was a little bit. Before Daddy and I went traveling on our boat, DC was home. It was where I came out, and came out in Leather. So, not only was I seeing people that o recognized from other events, I was also seeing people that I had not seen in almost 15 years. We spent the rest of the afternoon wandering around the vendor mart, hanging out in the hotel lobby chatting with friends, meeting new people, and people watching. Adam finally arrived later that evening, after having flight delays -- we got him settled, and ordered some dinner. I think everyone was tired from traveling, as we all went to bed relatively early, especially considering that Adam and I were operating on west coast time still. Saturday morning, Michael Brandon has a breakfast club that he does -- everyone gets up unspeakably early and we go to breakfast. Dakota, kKim and I joined the crew for breakfast. After that, we hung put in the lobby, checking email, surfing the web, watching Kim upload pictures to Facebook. The vendor mart opened at noon, so we headed down to check out what was for sale. I did manage to successfully avoid spending money, but there were a few things there that I would love to get one of these days. Saturday evening was Leather Cocktails. This has always been a favorite event of mine, and this one was very enjoyable as well. I ran into so many people that I haven't seen thT it made my head spin a little. It was great catching up with folks, and seeing how time has changed the people and clubs that I was familiar with. Saturday night, I hung put with Adam and some folks he knew from Inferno. I had planned to go to the Eagle, but the conversation kept me intrigued, and of course I was afraid I was going to miss something! Before I knew it, the bars had closed and I was ready for bed. Sunday was the contest. It took a few minutes, but I finally got in the groove of fetching and delivering drinks for the judges without interrupting their view of the contest or judging. The contest was as much fun as I remembered them to be, though I was very surprised at the drop off in the number of contestants. I remember 15 or twenty contestants, at this one they had 6. After the contest, and dinner, I met up with a guy named Dan and hung out with him for the evening. Interesting guy, and a lot of fun. Monday was the day to head back home. But before that, I wandered around the capital with Tim Starkey International Mr Bootblack and Adam. Had a great time hanging out with them. Ad touring some of the sites.

As I stood in the Buffalo tonight, something occurred to me. Part of this thought comes from talking to Utah Rox. He commented that San Diego was one of the few cities that still had a real leather bar -- the San Diego Eagle located at 3040 North Park Way. Utah was there judging the Ms San Diego Leather contest during the first part of San Diego Leather Pride. Don't get me wrong, our Eagle is a great bar, but it certainly is not a leather bar as I remember them back in the 90s. But that got me thinking. As I looked around the Buffalo tonight, it dawned on me that Runs such as this, contest weekends such as MAL harken back to the days when a leather bar was filled with men in leather -- doesn't mean that every man there was a leather man, but you had a higher percentage chance of finding one. These weekends take me back to a time when men did not go to a leather bar unless they were wearing leather... At the very least, a man in levis, belt, boots and a tshirt. It makes me a little sad that it takes events to get the leather men out to our bars. It makes meant to stand up and say to my brothers and sisters -- get out from behind your computer, make this weekend a special event for YOU, support you local leather bar, and show the twinks what it means to be in a leather bar. So far this has been a good weekend. We caught up with our friends Tom and Paul from the UK and Mark from Canada. 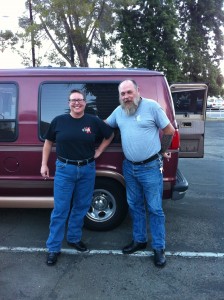 For this event I actually did take some pictures. But can't find my camera cord right now, pictures will be coming soon! Because of a commitment to the Hard Edge, we were not able to make it to Palm Springs until Saturday afternoon. We had the honor of being transported to Palm Springs by Tiger and her van "Lucie" who rides on for Cumho tires. -- This is a running joke in San Diego, so I had to mention it here! We arrived with enough time to pick up Duff and have a bit of dinner before heading out to the contest. We headed out for the contest at the Palm Springs convention center. We got there with a little time beforehand to say hi to people and for Tiger and I to hand out some passes for San Diego Leather Pride coming up in March of 2011 (for more information you can go to Mr San Diego Leather. It was great seeing so many familiar faces there! We enjoyed the contest, and all three contestants did a great job representing their own titles while competing for the Mr. Palm Springs title. No two contests are alike, and I have to say that the Mr Palm Springs contest is a top notch affair. The work that went into putting this contest on was impressive. After the contest, we headed back to the hotel and spent a quiet evening. Surprising huh? But Daddy and I haven't had a lot of opportunity to spend time together, so we took advantage of that. On Sunday, we met up with Jose (American Leather Man 1992), Randy (American Leather Man 2008), Alex, (American Leather Man 2009), and Louie (American Leather Man 2010) for an ABW photo shoot. It was a fun experience! I am looking forward to seeing the pictures!! On the way home, we were treated to a fantastic sunset. And I got a totally unexpected totally cool shot that I wanted to share here. 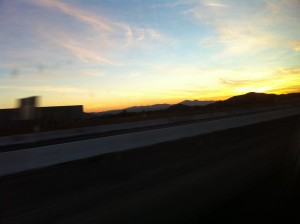 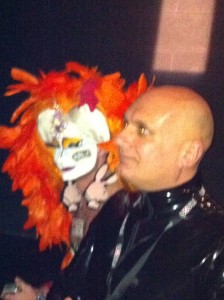 This was the first Rubber event that I have attended. So I was definitely looking forward to it. My puppy who is in to rubber was originally going to attend the event with me, but he could not because of work.

I flew in the day before the event started, on Thursday. I was expecting to have some work related meetings during the day on Friday, but those wound up being canceled.

I stayed with Dean and John for the weekend. Dean is the producer for the American Brotherhood weekend. I was re-introduced to Jason Hendrix who is IML 2004. He is a really great guy, and I enjoyed getting to know him better!

Friday, after a late breakfast, Jason, Dean and I loaded up Dean's car with the leather that we were going to sell at the Chicago Rubbermen booth and headed down to the vendor mart.

After getting everything situated at the booth, I wandered around the vendor mart and tried out one of the vacuum racks, as well as trying on (and ultimately buying) some rubber. I purchased a pair of rubber shorts and a rubber shirt!

The evening progressed with a "Greet the Meat" where the attendees had the opportunity to meet the contestants and socialize before the contest started.

Tiger says I'm now going to go lay on the man with the big fishing pole Tiger says okay now I've got a park this monster. Stand back i don't know how big it gets! I don't know what you're doing but it's making my clit twitch sez tiger There's a booby towel down so Wish can take her eyelashes off Daddy sez that's what you can call brownies with vanilla ice cream brownie Spoog That was a tweetable offense Tiger sez we should just open a bar called Spoog Joanne sez go big or go home! Mytightride.com we need a picture of that says Tiger Daddy said what are you doing Wish then he said you just need to drop it in the hole Tiger says I was way more relaxed than I thought I would be and I replied are you sure you aren't confusing relaxed with tired? http://yfrog.com/n66eecj Gotta love it! Daddy says get in the van Captain But crack Tiger sez -- never shave your ass before a road trip! Tiger sez: why isn't that working? Did I put it in the wrong hole? All this time we thought it was wish's phone. Turns out that it was her orgasm alert from her little electric buddy. There's all these short people around-- oh my god we are in Oz! And we just ate at Ozzies! We just found the limit on what I will or will not tweet. The dyke (tiger) just said it's better when he does it. Cum on the van! Oh wait a minute that doesn't sound right ... Bryan step away from the keyboard. Good! Her ass is leaving! I was so tired of looking at it! -- to the gold Honda that would not let us in front of her in the HOV lanes That joke is going to need a c-section. I clearly can't deliver it. The trees have been manscaped! http://yfrog.com/0qa2abj Daddy was asked how do you flog with your shoulder injured? I answered, boy flog, how else do you think he does it? I might be in trouble :) Wow his rims are yellow! His tires are onto water sports! Quick, someone piss on them. Quote from Daddy!